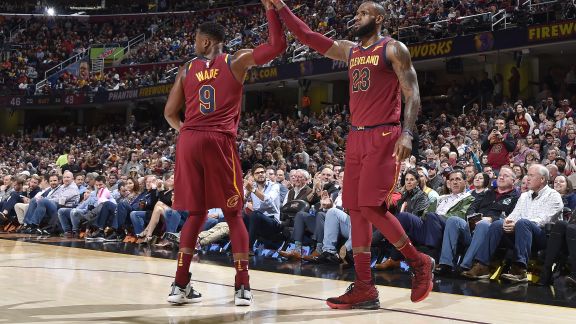 One play highlighted the Cleveland Cavaliers problem last night as they faced the struggling New York Knicks. Center Porzingis caught the ball 30 feet from the basket, drove into the lane and no one was able to contest his shot. That says a lot about the overall team’s defense and help defense. I’m not taking anything away from the Knicks because they came ready to play yesterday. But the Cavs are the Eastern Conference Champions and have lost four games to teams that didn’t make last season’s playoffs. As of today Cleveland is 3-4 and here is what I’ve noticed from this team:

They are too old and they do not have any “energy” guys coming off the bench. Their second unit, led by D. Wade consists of Kyle Korver, Channing Frye and none of these guys bring any spark off the bench. Wade contributed for only 6 points last night and that isn’t going to help them win games especially against top tier teams. The Cavaliers aren’t playing as a Team, one-on-one basketball is too prevalent, and guys are just camping out on the perimeter, waiting for Lebron to single handedly beat 5 guys. The team as a whole seems lethargic, they don’t anticipate the plays from the other team, but rather react and often times a little too late. There is a lot of inactivity which I’ve already mentioned and their front court isn’t battling for offensive or defensive rebounds, giving the opponent a lot of second chance opportunities to score. The team’s on and off ball defense is awful- guys aren’t sliding their feet to stand in front of their opponents. Cleveland’s transition defense is one of the worse in the NBA and we live in an era where teams are playing a D’antoni style fast-pace game. Against the Brooklyn Nets, Jr. Smith allowed Spencer Dinwiddie to dribble the ball all the way up to the 3point line and literally didn’t contest his shot, and it sealed the victory for the Nets. With this lack of effort on the defensive end, the Cavs will not be able to contend for another championship. To sum it up I’ll say that they are a very dysfunctional team loaded with veterans guys whose career is on the downside because of injuries or age. I don’t question Lebron James’s leadership  but I think this team needs more than a leader to thrive, they are a very horrible defensive team.