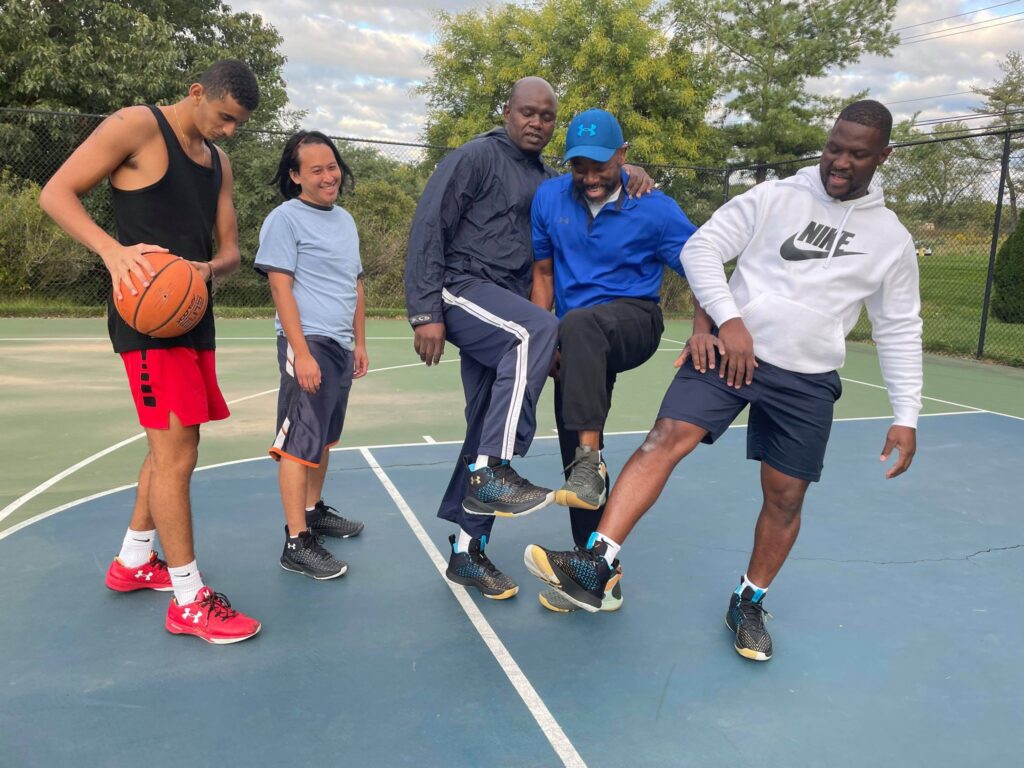 I just want to say at the outset that I don’t believe in chance or coincidence but in the Lord’s providence and the scriptures are saturated with instances of God working His plan to bring about the good of His people and  His Glory. You may be wondering why I’m saying all this and I’ll get to it in a minute. A couple of weeks ago , I posted a picture on LinkedIn that featured a few of the guys that I play basketball with in my neighborhood routinely, see picture below Most of the guys are part of a larger group that was created in the beginning of the Summer as Covid-19 restrictions were being slowly lifted off. I will get to the genesis of the group shortly. Why am I mentioning LinkedIn and a picture? My good friend Chris Burns, owner of ARCH came across the image I shared and made following comments and I quote,

How you haven’t applied to be a brand ambassador at Under Armour I have no idea. This photo is the stuff ad copy dreams are made of. Beautiful photo. If UA decides to contact you, I hope they run a series on why each of you is still playing the game. I also hope it leads to a national campaign allowing an old head to find runs throughout B-More and beyond. Great stuff Tayib!!!!!!

Chris proceeded to introduce me to Jay Shemenski ( Senior Lead, Global Brand Marketing at Under Armour). I told Jay about our basketball group and he didn’t hesitate to pull the trigger and sent us some footwear, samples of the Under Armour HOVR HAVOC 4 . Now let’s talk about the group and how it was born. I live in the city of Urbana (Maryland) which is about 35mn to 45 mn from Under Armour headquarters in Baltimore depending on how fast one is driving on I-70 and I-495. Urbana is a sports’ town, and I will be biased here and say that basketball is probably the most popular sport in the neighborhood. There are countless number of courts in every street corner, and if you were to drive around 4 pm during the Spring, you would see pick up basketball games all over the neighborhood. A lot of the kids who play are teenagers and many of them either play high school or college ball, in other words they are competitive. I just turned 40, love competitive basketball and don’t mind playing with guys that are much younger and more athletic than I am. Basketball is also a cerebral game and many of the guys my age in our group share this philosophy. We all would converge to the same court right around 6 pm and played till sunset. And other guys would show up and join us as well. So to be more organized, we decided to create a group by sharing each other’s number. This is how it works. Almost every day around 5 pm, any of the members usually sends the following messages

Who is balling today or are we on today “

And the other group members usually respond with

After that, we set a meeting time and  all congregate to the courts at that given period and the fun begins. We currently have about 18 active members. Let me give you the DNA of the group. I will be possibly chronicling each member in weeks to come. The youngest of the group is 17 and the second youngest is 19. We have other guys who are about 22,  but the majority of the members are 35 and above. The oldest member of the group is 55 years old, is about 6’4 and probably the roughest and most physical player among us. The most beautiful aspect of this collective is its diversity. Nations represented are as follows – USA, Togo, Ghana, Liberia , Philippines, Ivory Coast, India, Pakistan, China. Now don’t let the age fool you, some of the most competitive games I’ve played in my life are with this group of guys. The games are very physical and taxing on the body but as people say – ball is life . Everyone looks forward to these  evening games  because of the following ingredients –  the trash talking , the camaraderie, the adrenaline rush on a game winner , the physical activity, the stress release, the conversations at the end of the game and the unity regardless of age and ethnicity. We are a little bit sad because the Summer has ended and we’ll probably have to shut down our activities when it gets cold. Most of us have day jobs and aren’t free till after 5 pm. But in the Winter days, it gets dark too early so we’re looking for other alternatives. This is in a nutshell what this group is all about. We decided to name the group the SCRUBS not because we aren’t excellent basketball players, but because we know our limits ( we ain’t NBA players and we stay in our lane). There is another reason why I thought the name SCRUBS was appropriate for us. Everyone is welcome, whether you can dribble a basketball or not, you’re welcome to participate in our activities. And one of the things we do constantly is evenly match our teams so the games can be fair. I know that the name SCRUBS has a negative connotation, and no one wants to be called a scrub or be associated to a scrub. But we redefined its meaning:

S is for Soberness, C is for Character, R is for Respect, U is for Unity. The first 4 letters define the foundation of the group and the remaining letters B for Build and S for Societies define the function of the group. So basically SCRUBS means Soberness, Character, Respect and Unity Build Societies. Basketball has a way of releasing the stress of the day hence soberness. The bible tells us to be sober minded for the sake  of our prayers. Without a sober mind it’s hard to be effective. Then Character comes next; again when we play our games we are resilient and relentless. There are many arguments about calls and fouls, and sometimes those have a way of testing our character. Character is who you are behind  close doors, what nobody else sees ( the inner man). Respect is such an important ingredient in our games; despite the heated exchanges sometimes, we respect and value each other’s opinion. Unity binds all these qualities together and our unity is reflected through our diversity in age and nationalities. I believe that all those qualities are essential in the building of any society. The images below were taken after we Under Armour’s generous offer of the UA HOVR HAVOC 4 I will be chronicling the story of several members of the group in weeks to come and I’m also going to be doing an on court testing of the UA HOVR HAVOC 4. On behalf of the SCRUBS, I want to take some time to thank Chris Burns for connecting me to Jay, and I also want to thank Under Armour for their generous offer. The items will be put to good use and each member of the group is grateful and very thankful for your kindness. And ladies and gentlemen , this is why I said in the beginning that I believe in the providence of God and His effectual kindness.