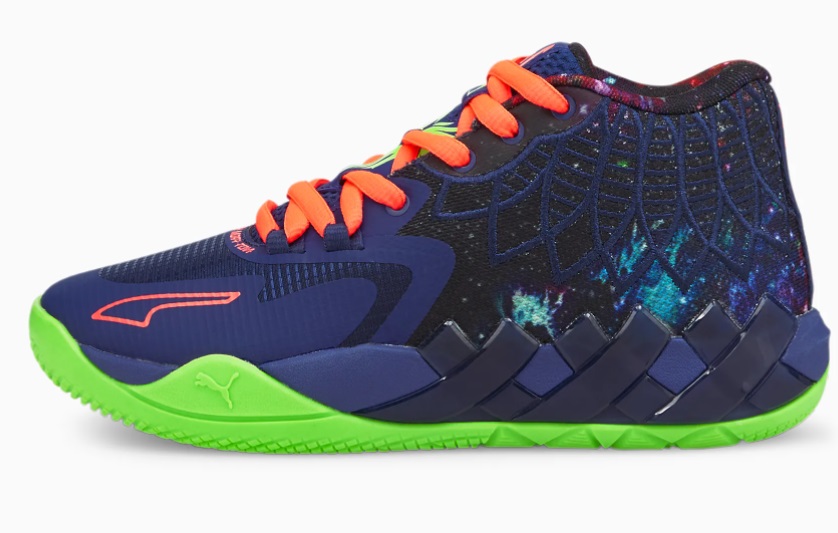 In recent memory, Lamelo Ball was one of the most talked-about high school basketball players. With his extraordinary skills on the court, he has been creating waves on social media and in the sports world. I’m delighted Puma was able to snag him after he signed with the Hornets before other major companies like  Nike and Adidas were able to. The Puma MB.01, his trademark shoe, has been a huge hit, with basketball fans and sneakerheads alike battling  to get their hands on the various hues that have been released. The most recent, the Lamelo Ball Puma MB.01 Galaxy, will undoubtedly be sought by many, and rightly so.

The  Puma Mb.01 Galaxy is special for a number of reasons. First, the galactic theme is something that was once only seen on Nike sneakers. However, Lamelo has now brought this theme to Puma, giving the brand a new lease on galactic-themed sneakers. It’s believed that the underlying meaning of this theme is that the Melo is “out of this world “and the  sky is the limit for him. Second, the marriage between colors on this sneaker is complementary and creates a look that is both unique and stylish. Thirdly, the price point is competitive, making it an attractive option for those looking for a high-quality sneaker without breaking the bank. Finally, the shoe is both eye-catching and incredibly comfortable. But it isn’t just all style and no substance – it also features incredible cushioning that provides a comfortable ride, even during long games. Plus, its easy break-in period means you won’t have to suffer through any painful blisters. Let’s also not forget another interesting reason why you ought to consider this shoe. Its current resale value is about $250, leading to a profit margin of +$90. If you decide to grab a par, refer to the details below

Where To Buy The Puma MB.01 Galaxy

Lamelo Ball has been making waves in the basketball world ever since he was a young teenager. The floor general from Chino Hills, California caught the attention of scouts with his highlight reel passes and long-range shooting. And at just eighteen years old, he’s already considered one of the best players in the world. Ball made his much-anticipated debut in the NBA in 2021, and he hasn’t disappointed. He’s been effective on both ends of the floor, using his 6’7″ frame to control the game. His length and vision make him a nightmare for opposing defenses, and he’s shown an ability to score at will. With Lamelo at the helm, the Charlotte Hornets are quickly becoming one of the most exciting teams in the league. There’s no doubt that Lamelo Ball is a special talent. His unique skillset and court awareness set him apart from other players his age. And with each passing game, he only seems to be getting better. You can see why Puma didn’t even think twice about giving him his signature shoes, the MB.01.