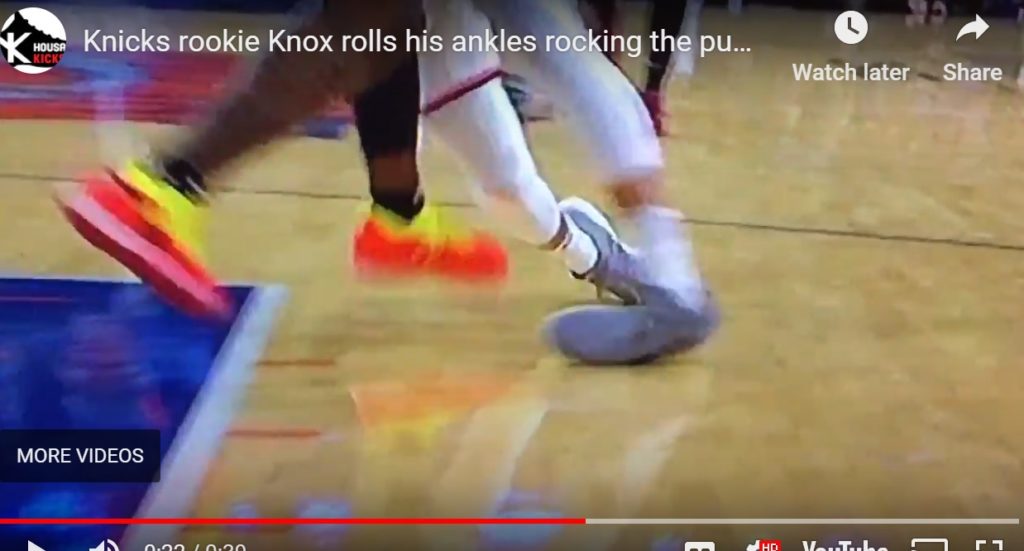 I didn’t feel like sitting in front of my computer right now and writing this post. I was enjoying the Knicks and Celtics game on this chilly Saturday night when Kevin Knox rolled his ankle on a fast break . I didn’t think the injury was serious because he didn’t seem to be grimacing on the floor too much. He just held his ankle and wouldn’t get up. I was waiting for the replay to see how serious the injury was and I have to tell you- I didn’t watch the replay more than once. Knox was carried off the court and was done for the night. There hasn’t been an update about his injury as of now but I’m sure he’ll miss several games.

I’m not writing just to talk about the injury but rather the cause of the injury. A couple of weeks ago, I was in my local footlocker and came across the Puma Clyde Disrupt. I picked the shoes up to contemplate them and didn’t think they were  built for performance purposes. They felt heavy in my hands and were a bit too narrow especially near the forefoot. And shall I also add that they were made with a knitted material and I’m not sure how sturdy that is ( especially for the new mobile big men in the NBA). Lockdown and landing are important elements in the game of basketball. If you look at Kyrie’s sneakers, they are wide near the forefoot for stability purposes. The Puma Clyde Disrupt may not have caused the injury ( there are tons of basketball players that have been hurt rocking Nike sneakers) but if you look at the recording below, you’ll hear the commentator say something interesting,

He said,”This isn’t a good look for Puma.”

I second that because people will automatically blame the injuries on the Puma Clyde Disrupt the same way Adidas was blamed for Derrick Rose’s injuries. The shoes are already sitting on most retailers’ sites and this injury by Kevin Knox will definitely negatively affect the way people view the Disrupt. Check the video below and let me know what you think may have caused this ankle roll.