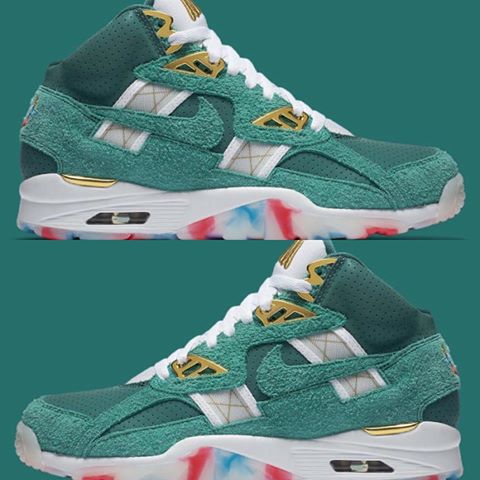 The Nike Air Trainer SC High ATL 96 QS released about three weeks ago right in the middle of the Rio Olympic games. I was fortunate enough to pick up a pair in a size 8; the pictures do not do these gems any justice, they are a thing of beauty. the detailing on them is breath taking and just stunning. My only gripe with Nike

is the box- for as much details they put into the shoes, they could have easily created a special package to go along with them. They come in the usual red and white Nike box with an” S” shape cardboard inside to separate both left and right pairs.  The shoes pay tribute to the 1996 Atlanta Olympics where guys like Micheal Johnson and Carl Lewis made history. The base colors were inspired by the event logo featuring Green, Gold, Teal , and Red along with  the confetti pattern on the outsole. The left pair  contains a stitched up peach on the outer tongue to pay homage to Georgia, known as the “peach State” of the USA. A Premium hair suede covers part of the toe box and sides of the upper part including the Nike swoosh and the remaining parts sport a perforated synthetic -like leather.

The inner liner features a dual density foam for adequate comfort and stability. The midsole sports a Visible air unit in the heel area and the forefoot area contains an invisible zoom air unit. The  Nike Air Trainer SC High were made famous by Bo Jackson who was a phenomenal athlete who played in both the NFL and MLB; he became a popular figure  in the 1980s and 90s with his faddish “Bo Knows” Nike campaign.