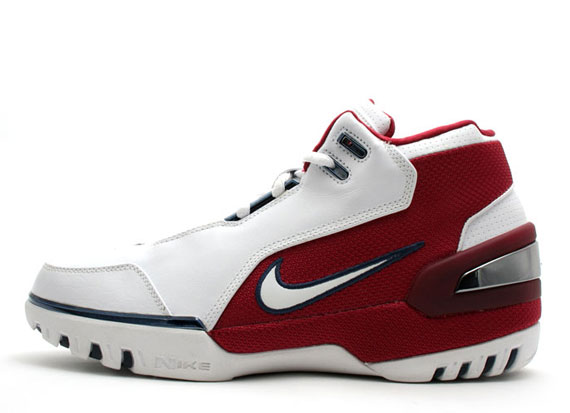 The Nike Air Zoom Generation lebron 1 is coming back again on Jan 25; they were originally introduced in 2003 as King James was leaving high school for the big NBA stage. The shoes sold okay, but I don’t recall them being highly anticipated by many sneaker heads at the time ( it was 2003, and most of the old heads weren’t as hype driven  as today). You could literally walk in stores and there were still sizes of the shoes available for purchase. The next models after the Lebron 1 eventually went on sale and still basically sat on shelves. I think Lebrons took off a little after the Lebron 7

dropped; but what definitely took the line over the top was the “decision”. We all remember watching a very nervous LJ making the move to take his talents to Miami. The whole process engendered the Lebron 8 Pre Heat AKA South Beach

– the shoes were an instant classic. For the first time, people were actually camping out for Lebron sneakers; the Lebron 9 followed suit with one of the best silhouettes I’ve ever seen.

But King James’ shoes have been on the decline since the Lebron 10. The 11,12 and 13 were absolutely awful and did horrible ( not only has the price increased, but their aesthetic is terrible). Nike Basketball has been pretty stale in general and you can literally walk in any Footlocker and find shoes for as low as $49.99 ( and i’m talking about shoes with a suggested retail price of $160 i.e Hyperdunk, Lebron, Kyrie. Kd and more). Nike is still dominating the shoe industry but Adidas has disrupted the casual/ running shoe significantly with the introduction of the NMD’s, UB and the whole Yeezy line.  Adidas is silently trying to gain more percentage of the basketball market as well- they have signed James Harden, Andrew Wiggins and Damian Lillard. And guess what? each one of these 3 guys are very marketable and  their shoes have been on the radar of many young kids and adults alike.

But Nike can regain some momentum with reissuing of the original Nike Air Zoom Generation Lebron 1 ( this is just one of their many counters against the three stripes). With Lebron James cementing his legacy in the league ( after winning a third NBA in title in fashion), this is the perfect time for Nike to acquire enough thrust. Think about it: LJ left Cleveland, was shunned, then he goes back , wins a title- it’s like back to Genesis, new beginnings, and re-releasing his entire line makes perfect sense. I wonder how many of the earlier models will be re -introduced?

The Nike Air Zoom Generation Lebron 1 were supposedly engineered to represent what a physical beast LJ was coming out of high school. With a combination of a mesh and leather upper. the shoes were equipped with a special ventilation system near the midfoot. They also sported an external heel counter air zoom units on the midsole for superior cushioning. The first colorway to drop will be the white and red one. Here is a video of King James talking about the shoes