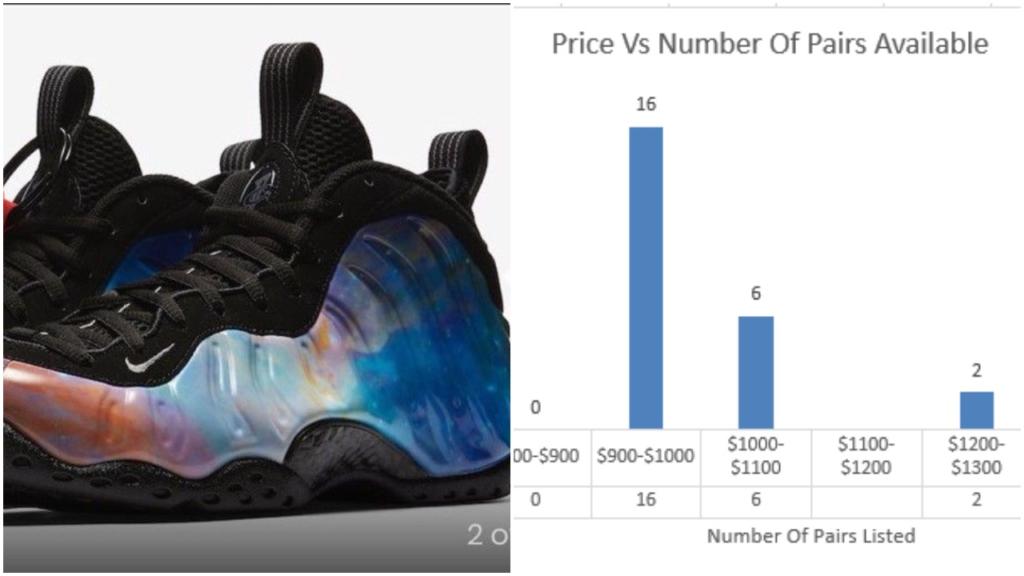 I said a week ago that the Air Foamposite One QS Alternate Galaxy was a sign of things to come. When I say a sign of things to come, I’m referring to scarcity and Nike’s Edit To Amplify campaign. If you’re paying attention at all to the latest Air Force 1 sneakers that have dropped, you’ll definitely notice a major difference- there hasn’t been any frivolous colorways, so far we’ve had the digital camo pack, the rocafella edition, the logo pack ( dropping today). But I’m still unsure if Nike is fully sold on the Edit To Amplify plan especially when two days ago, I came across the hideous Jordan 6 flyknit.

The Air Foamposite One QS Alternate Galaxy is only going to be available at one Footlocker location in Boston. I did a quick market research and I put the data in the histogram below. A total of 4 pairs were listed within the $700-$800 price range, 16 within the $900-$1000 price range, 6 within $1000-$1100, 2 within $1200-$1300 and only 1 within $1400-$1500. Let me make something clear though: so far only two pairs were actually sold , one for $725 and the other for $900. what does this mean? It could mean a lot of things, maybe people aren’t interested in the shoes even though they are scarce ( that’s going to be a dud for Nike). Yeezy’s go for that much and even higher and aren’t as scarce as these foams and they sell in massive numbers. The other argument could be that most folks know that the shoes will eventually drop during the All Star week end in LA hence are willing to patiently wait. What Do I suggest? I’ll go with the latter, wait till the All Star week end to get yours and I’m assuming there will be more pairs available and the price will drop significantly, so don’t rush. Most of the pairs listed at above $1200 were bigger sizes ( obviously because there aren’t that many available).

Hopefully, this will help you make a better purchase decision. For those who can’t wait, you can buy them on eBay now, refer to the listings below