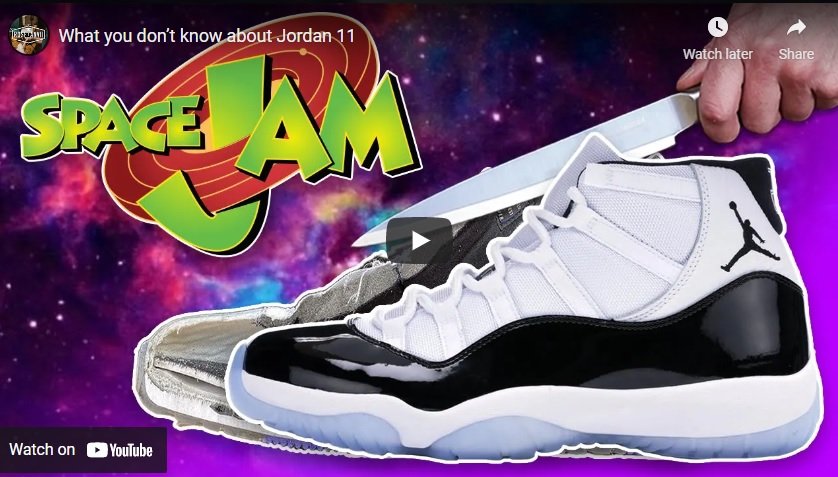 The Air Jordan 11 was released in 1996 and was the first Air Jordan to be released during the post-Michael Jordan era. The shoe was designed by Tinker Hatfield and inspired by a tuxedo, with a patent leather upper and a translucent outsole. The Air Jordan 11 was also notable for its use of carbon fiber in the midsole, which helped to improve durability and support. The shoe was an instant classic, and is often considered to be one of the best Air Jordans of all time. It has been released in a variety of colorways over the years, including several that are now considered highly collectible. The Air Jordan 11 remains a popular choice among sneakerheads and casual fans alike, and its legacy is sure to continue for many years to come.

While the Air Jordan 11 is praised by many, few have got an inside look of the many elements that make up this iconic shoe – until now. Thanks to educational YouTube channels like Rose Anvil, the consumer can know the anatomy of the Jordan 11. In the video below, he completely dissected the shoe to reveal its components.

Everything You Need to Know About The Air Jordan 11

Every one of you that watches the video thoroughly will have a different takeaway, but this is what I’ve learned from it. The first thing to know about the Jordan 11 is the famous patent leather. Rose anvil video explains that it was invented and really popularized in 1818. Patent leather is regular leather that is coated with lacquer and linseed oil. This was a labor intensive process because plastics were not used to put on top of leather. They had to do it in tons of layers and in between the layers.

How durable and what was the patent leather on the Jordan 11?

it is surprisingly thick – much thicker than the standard Nike leather. Rose Anvil put it to the flame test and it took a while to get to the leather itself. The leather is 18 millimeters thick, making it one of the thicker options on the market.

The functional purpose of patent leather in the Jordan 11 was to provide durability and prevent stretching. No one wants their shoes to fall apart in the middle of a game – least of all, Michael Jordan. So when they were designing the 11’s, they wanted to make sure it could stand up to his intense playing style. That’s where patent leather comes in. It’s a strong, stiff material that doesn’t stretch easily. That means it can help to keep the shape of the shoe intact, even when MJ’s foot is moving around inside it. The next element that was analyzed on the shoe was the mesh materials on the uppers.

Anyone who has owned a pair of Air Jordan 11s knows that they are a comfortable sneaker right out of the box. Patent leather is very stiff and not very flexible. This would have made it hard to break the entire shoe in and MJ would’ve hated it. So, the way the brand got around that is by covering most of the upper with ballistic nylon canvas. It is less stretch resistant and the combo of patent leather and mesh made for the perfect durable and ready to play in sneaker.

Rose Anvil tested the quality of the fibers that made up the mesh/canvas upper. The ballistic canvas nylon upper is springy and adaptable, hugging your foot while still allowing for flexibility. It’s also, unfortunately, very good at absorbing stains and dirt – especially if you’re unlucky enough to get the white ones. But the upside is that it complements the patent leather perfectly.

He also talks about the carbon fiber, but I’ll let you watch the video to discover what was said about it. But overall, the Jordan 11 bears more positives than negatives, it is a masterpiece and was actually built to emulate convertible cars, and it screams just that, no wonder why it is most beloved amongst Jordan signature sneakers.