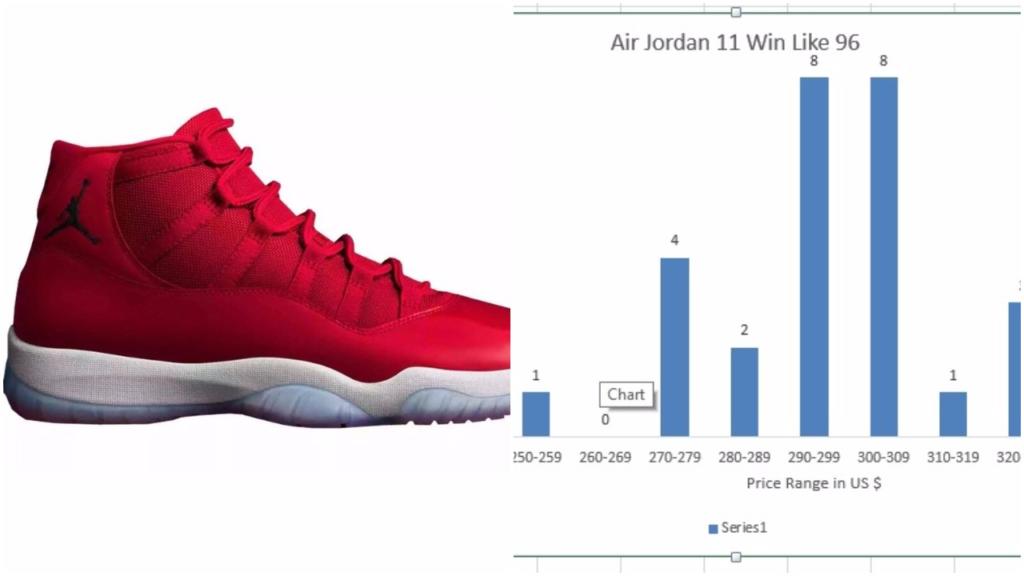 0shares
There has been a shift in the sneaker market in the last couple of years, it’s no longer a reseller’s market but rather a buyer’s market. There are countless evidences  I️ have provided in that regard. I am talking from first hand experience because I’m a reseller or shall I️ say was a reseller. I understood the signs of the time and unfortunately the average reseller is still oblivious to what is taking place now in the market. I’m not bragging but I’d rather tell the truth than tingle your ears. If you’re getting your sneakers at a wholesale price from Nike ( then you are doing great) but if you’re getting it from retailers then it’s time to hang up the gloves. How much do I️ expect the Air Jordan 11 XI Win Like 96 to resell for? To answer this question we must look at two key factors. The amount of units produced and the preorder price in the common marketplaces. As I️ said in a post a few days ago I️ estimated that Jordan brand produced about 1,300,000 pairs of of the shoes ( men’s and kids included), see link below
How Many Pairs Of The Air Jordan 11 Win Like 96 Were Produced?
Now the next thing to look at is the selling price of the shoes as of now; Jordan Bran released them a couple of weeks ago in limited numbers so their highest selling price would be now. I collected data from sold items on eBay ( my sample size was about 28, meaning 28 pairs sold). Now check out the histogram below and i’ll give you a quick interpretation. We have a few outliers in there, the lowest the shoe sold for was $259 and that was a size 11.5. The highest It sold for was $349.99 and that was a size 10.5. So to get an accurate estimate we’ll look at the histograms with the most items sold which is the one between $290 and $309 with about 16 pairs sold within that range. So I’ll use this to estimate the resale price by taking the average of both numbers. It yields to $299 and this is December the 2nd (the batch on eBay now is out of the limited stock), which tells me that in 10 days when the shoes are released to the general public, this price will probably drop by $15 or $20 so I can estimate the selling price to be about $279.99.

If you’re a Reseller, this isn’t a great shoe to flip, but if you’re a collector, like I said earlier, it’s a buyer’s market. I wouldn’t even pay the $279.99. There are going to be enough of these shoes available so be patient. And we all know JB is going to restock these every other month for the entire upcoming year.

For those that want to buy the shoes now, check out the eBay listings below from our featured sellers, I’ll be adding a comprehensive list of the retailers carrying the shoes in a couple of days