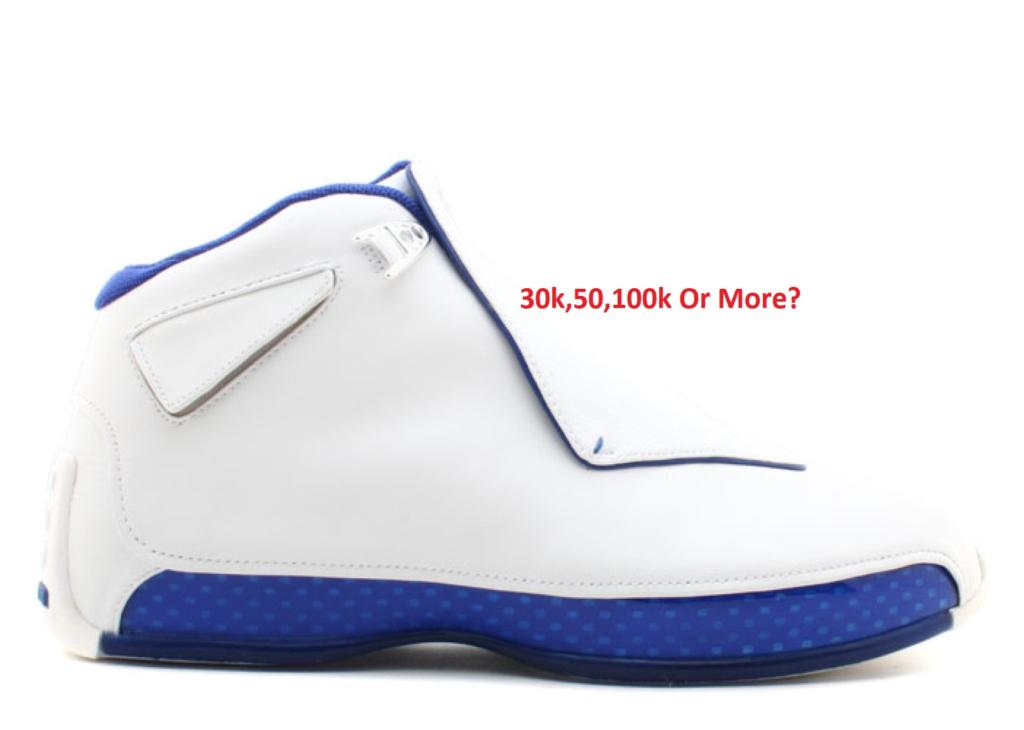 I was going to write a post about the current market value of the Air Jordan 18 XVIII White Royal, but I stumbled upon a particular detail that changed the course of my post. To understand the current market value of a commodity, one must first study its availability. So my first homework is to see how limited the shoes are. And to check that I was looking at Nike’s distribution channels mainly Footlocker and its derivatives.

Look at the picture below, it’s a screenshot of four retailers January Release Calendar

If you look closely at each store release calendar, you’ll notice that for DTLR and kicksUSA between January the 20th and January the 25th, there is an indicated release date for the Air Jordan 18 XVIII White Royal ( January the 22nd). But for Footlocker and its derivatives ( FTA, Champs, Eastbay) and ShoePalace, the January 22nd is missing. Does it mean that those stores aren’t getting the shoes ( by the way I checked Finishline too and the January 22nd date was missing as well).

. Those stores that are missing the January 22nd date aren’t getting the shoes ( that’s simple logic).

. Or they are getting them but the shoes are very limited. And I think that’s what it is , the shoes are so  limited that they don’t even appear on the Calendar. It happened with the Green Suede Jordan 6 Gatorade. Footaction didn’t have the shoes on its release calendar until a day before the release date. And as you all know the shoes were limited. I think the 18’s are going to be even more limited than the Green suede 6 based on my argument. But How limited? That’s the million dollar question. For the Jordan 6 Green suede, I concluded that 40k ( 40,000 pairs) were produced and I think I was pretty close because the resale price has actually increased as of today. So for the Jordan 18, I’m thinking between 30k and 60k were produced ( all of this is based on a logical argument). I may be totally wrong. But one thing I know for sure is that Jordan Brand already said Retros will be harder to get this year, so with that in mind I can tell you with confidence that the Air Jordan 18 XVIII White Royal will be limited ( and like I said i’m thinking between 35,000 and 60,000 pairs were made).

You can buy them now on eBay, see listings below