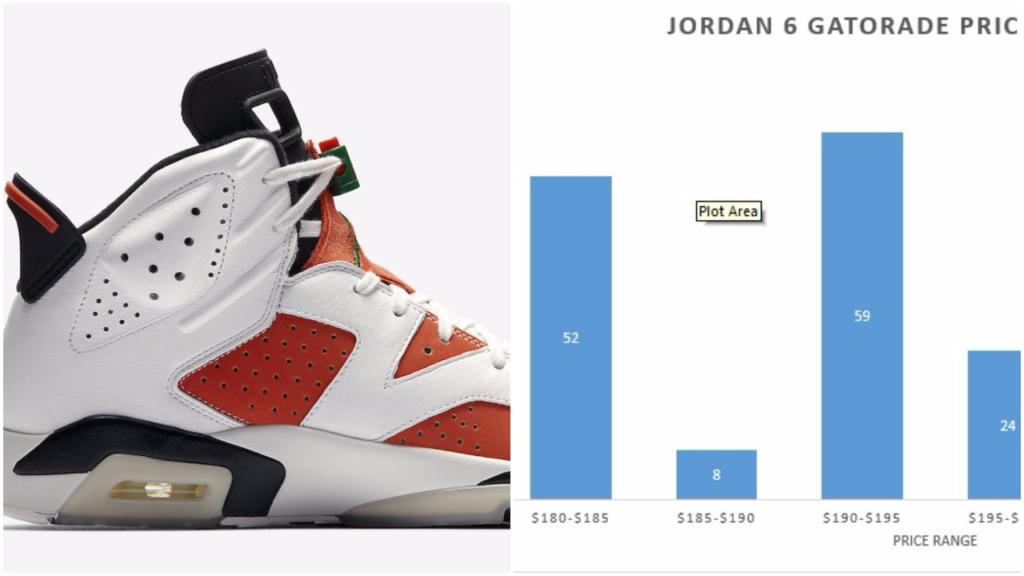 I got up early on Saturday braving the icy roads to pick up the Jordan 11 Win Like 96; I wasn’t going to pick them up until I got challenged on one of my Real VS Fake comparisons. The individual who constructively criticized my observations pointed that the retail pairs  also had widow peaks near the toe box. I had no choice but to pick up the shoes so I could update my comparison, and indeed the retail pairs had the widow peaks. You can go check out the updated post in the link below

Now back to the intent of this post, the Air Jordan 6 Gatorade is set to officially drop on the 16th of December, which is next Saturday. I was looking up prices on eBay and I was very surprised to see that the shoes were already available for below retail. It led me to  investigate their current resale/market value. The data you’ll see was collected from 147 sold pairs of Gatorade 6’s on eBay. Check out the histogram below and its interpretation. We have an outlier including a total of four pairs; and when I checked the sizes of the pairs sold ( $205,$210) , they were all big sizes ranging from 13-15 so it explains it. Jordan Brand probably doesn’t many of the bigger sizes so the resale price on those will definitely be higher. Based on the rest of the data, the average resale/market value of the shoes as of now is $189.26 ( and I disregarded the outlier).

The shoes aren’t even out yet and they are reselling for below retail; if you’re a reseller, I’ll suggest you stay as far as you can from these. Some might argue that the shoes are fake, but all the sellers whose data I collected only sell legitimate sneakers. And I’m sure you’ll ask if that’s the case, how can they sell them for below retail this early.

What does this mean for smaller retailers like DTLR, SHOE CITY, SPORTSZONE ? This is terrible news for them because they can’t compete with these prices. And this is exactly why retail is in bad shape. But the consumer is the biggest winner because this market plays right into his/her hands. With the Air Jordan Gatorade 6 priced this low already, I’ll invite you not to buy them now but to wait till the shoes hit the sales rack. They will be marked down probably two to three weeks after they release so please be patient.

Well, there you have it folks, stay tuned for further updates and if you want to buy them now for retail refer to the listings below