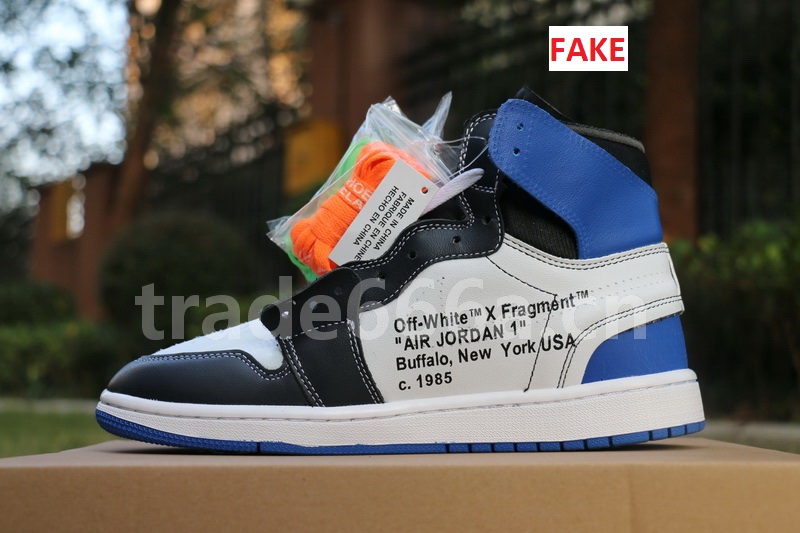 Yesterday I shared a post about the very first openly fake Yeezy store in China; I’m amazed that this store hasn’t been shut down but the fact is,

It isn’t easy to shut down these bootleg stores in China without a lengthy lawsuit, their laws are different than ours

I may not have quoted him right but he said something along those lines. So I think I now understand why the replica market is booming in that part of the world. Nike’s collaboration with Virgin Abloh, the Off -White , the Ten collection has been the talk of nearly every sneaker blog. FN went as far as saying that the Off-white AJ1 was the most coveted shoe of the year, which I disagree with by the way. Not only have bootleggers replicated the entire collection, but they’ve also jumped ahead of Nike and created newer iteration of the shoes using other Jordan Retro silhouettes, in this case the beloved Air Jordan 1 Fragment. Don’t get me wrong, I don’t support fakes, but one has to admit that these Off-White Fragment Jordan 1’s actually look great. And I wouldn’t be surprised if Jordan Brand eventually releases this particular pair in the future. This poses a lot of problems though for brands in general; with fakes becoming normalized in the sneaker industry, I wonder how much money brands will be losing as a result. Are they going to be so significant that they put a dent into these brands’s profit margin. I don’t think major brands will suffer as much but what about smaller brands?

According to a CBP report,

This is something to seriously consider; for those who think buying fakes doesn’t really hurt anyone, think again. I’ll give you my own example and let you marinate on that. A couple of years ago, I created my own color change mugs with my own graphics and sent it to China to get them manufactured in bulk. I had about a 1000 mugs made, was selling them for $30 to $35. I sold an average of 10 mugs a day and suddenly my sales dropped. Upon investigation, I found out that other sellers were carrying the same mugs I had on eBay; to make a long story short, not only were  other factories replicating my mugs, but the same factory that manufactured my mugs was also selling them to other third party merchants.
Here are the pictures of the Fake Off-White Air Jordan 1 Fragment. Off- White Air Jordan 1 Most Coveted Shoe Of The Year, Based On What?