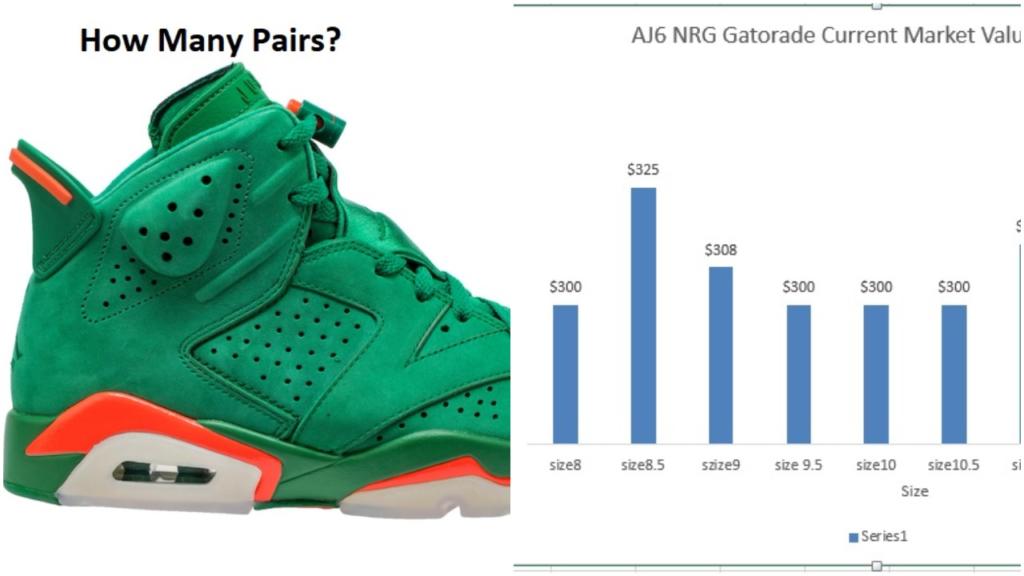 I was asked to do a quick research on the current market value of the Air Jordan 6 NRG Gatorade green a couple of days ago. I finally got to it today and wanted to share my findings with you. Let me quickly set the stage though; unlike the white & orange Gatorade 6 that dropped last week, this model is a bit limited but not as scarce as many people think. It seems like this is going to be a HOH ( House of hoops) only exclusive and I’m assuming that each location will probably have between 12 and 24 pairs. The shoes will obviously sell out ( that’s a no brainer) but their resale value will not exceed $280 in my opinion. Let’s see how they are currently doing on eBay, all the results of my findings are in the histogram below. According to the histogram the size 13 is selling the highest at $344 but I’m expecting these prices to drop by $15 to $20 once the shoes drop. Based on all the numbers on the histogram, I’ll say that the shoes will not sell for more than $300. The average price will probably drop by $20 once the shoes release so we are looking at $280 after the official release date.

Let’s try to estimate how many of the Air jordan 6 NRG Gatorade green were produced.  Let me start up with the assumption  that Footlocker and its derivatives account for 1/3 of all the sneakers produced. I counted about 133 FTL( footlocker stores) that will carry the shoes. I checked FTA ( footaction), Champs and Eastbay and none of their calendars indicated that they will carry the NRG Gatorade 6. So we are left with Footlocker and if we assume that each store gets about 24 pairs , then the total will be:

I’m also assuming that their online shop will have twice as much,

So in total Footlocker alone will have an inventory of 9600 pairs and let’s round it off to 10,000 pairs. All these numbers are my own estimate so take everything I say with a grain of salt.

If FTL holds about 1/3 of the entire stock I’m assuming,

Well there you have it folks, I think this is definitely going to be a good shoe for resellers but it’s such a hard colorway to wear so that might dissuade people from buying them.

For those who want to  buy the Air jordan 6 NRG gatorade green now, see the listings below from our featured sellers,

Footaction will actually have the shoes online and in stores as well.