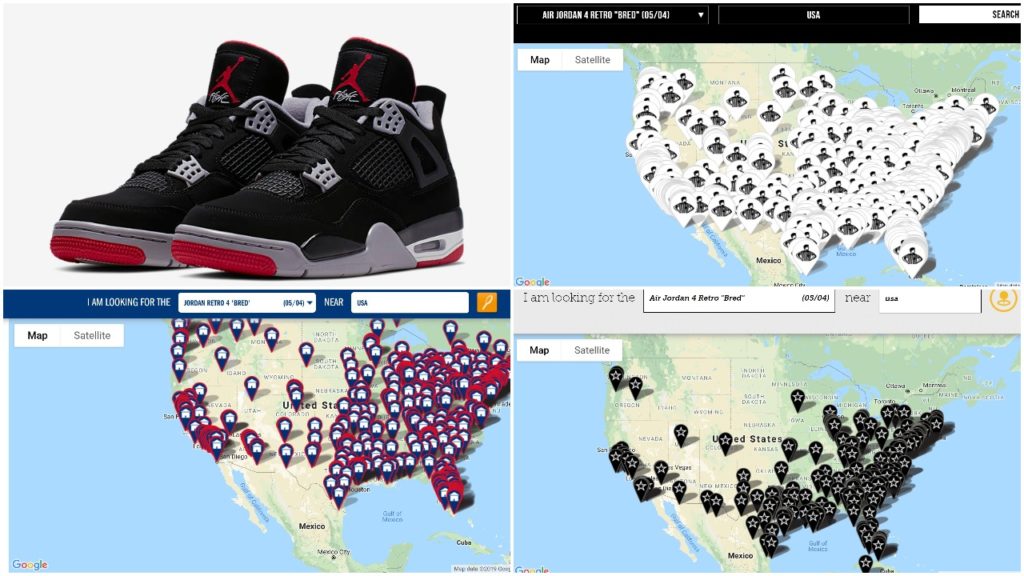 I already wrote two key posts on the Air Jordan 4 Black & Red and will invite you read them. The first one had to do with the pricing of the shoe see link below

And the second post dealt with helping buyers identify the fake pairs that have already infiltrated the market, see link below

This morning, my task is to come up with a plausible estimate of the number of pairs of the Bred 4 that could’ve been made. The shoe definitely screams the Edit To Amplify campaign and for that reason, I’m convinced that there will be a substantial amount of units that have been manufactured. We’ll first need to figure out the number of stockists that are getting an allocation and build our hypothesis from there.

Confirmed major retailers: Nike, Footlocker, Champs, Footaction, Finishline, Hibbett, Dicksportinggoods and all these stores will also include their online shops. We’ll also have to add Eastbay as well.

Based on the information above I’ll assume that Nike will take a 1/4 of the production, Footlocker & Family ( Champs, Footaction) will also receive 1/4 , Finishline, Hibbett and Dicks will split another 1/4, and minor chains all together will account for the remaining 1/4. I’m only considering North America in this post ( notice that I didn’t include international locations).

We’ll also assign an average of 36 pairs per FTL store, 12 per FTA and Champs store; and lastly we’ll give the online stores about 1/3 of the total the physical stores are given.

The online stores are note negligible so we’ll assume that they will be given about 1/3 of the total allocation the physical stores are given.

and the Grand Total for North America= 61072 x 4=244288 pairs ( you can extrapolate from this and give the same number to the international locations) which will create a total of 488,576 or 500k pairs. Once again take all this information with a grain of salt ( it’s all based on assumption that I came up with).

SHOULD YOU BUY TO FLIP?

I usually gather my data from eBay but the lack of time forced me to consider StockX’s sales records. As you can see the average selling price ( market value) is $270 ( for a 32.5% mark up). The suggested retail price of this model is $200 before tax and folks are allowed to use their discounts on it ( $10 off, $20 off or military discount). So I’m assuming that people are roughly going to be paying between $195 to $202 for them. if you sell it via StockX you’ll roughly end with a profit of $25+ after fees are taken away. So should you buy to flip???? It all depends on how many units you can acquire and you better hope that the value doesn’t plummet upon release date. I think it’ll decrease by $10 to $20 by Saturday so I’ll monitor it closely. Retailers shouldn’t have any difficulty selling this model at all. But I’ve realized that the Jordan 13 Cap & Gown did horrible this past week end ( my local footlocker had only sold 1 pair by 6 pm). Nike should have never released it a week prior to the Bred 4. I’ll be writing more about that this week, stay tuned.