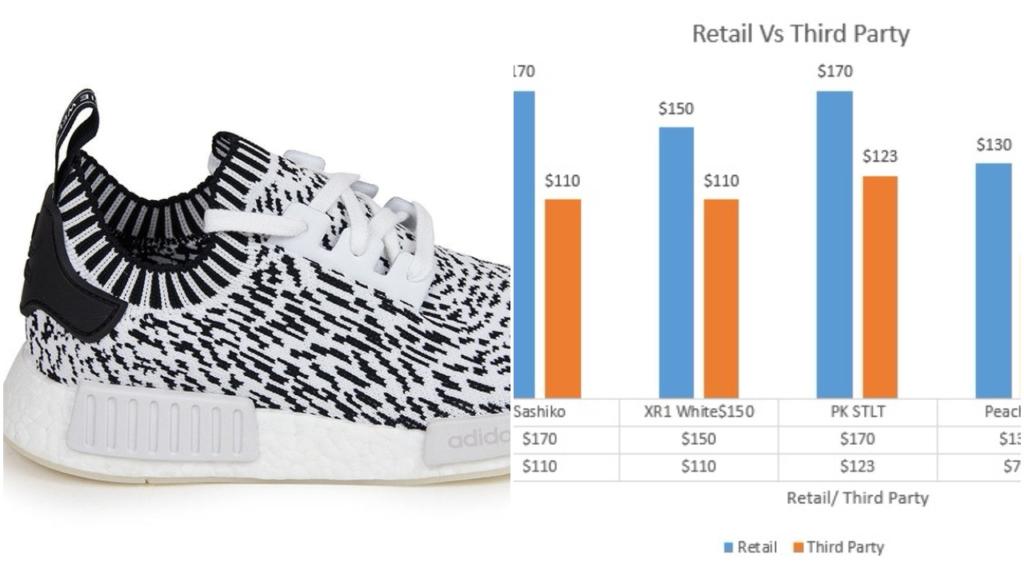 Adidas has released several iterations of the NMD’s in the past few months that have been very irrelevant. When I say irrelevant, what I’m trying to really say is that no one has really cared about the latest styles of the NMD’s that have dropped. Two years ago , I didn’t have to check footlocker release calendar to see what NMD’s were going to release, all I had to do was check my Facebook newsfeed and that was enough.

I don’t have retailers sales data to see whether the NMD’s are still among the top selling shoes in the market but a quick research on eBay will answer that question . Let’s consider five of the latest colorways that have dropped and see their current resale value on eBay and compare that to their suggested retail price. I summarized my results in the histogram below, see the interpretation that follows after. From the numbers above, you can clearly see that the NMD is trending down and the price is plummeting at a very fast rate. And I think it’s going to get even worse in the months to come.

I’ve already said in several of my posts that sneaker heads and their derivatives ( Resellers) drive the sneaker market. When the original Adidas NMD released, it had a high resale value, its profit margin was about 100 to 150%. And Adidas seized the opportunity and released a fury of colorways and eventually killed the market value of the NMD. The brand even made it worse by increasing the price of the shoes. They went from $ 109 to $170 within a two year span which is absolutely ridiculous. At this point, the only thing Adidas can do to save the NMD is collabs. I doubt that regular NMD’s ( or shall I say GR NMD’s) are going to fetch any substantial revenues.